Those of you that follow my Facebook fan page (www.facebook.com/CPMagic) may well have noticed that I was recently awarded by the Lux Wedding Industry Awards.

So why am I doing this? Surely I should just promote the hell out of the fact that I’ve won an award for being the “Best Close-Up Wedding Magician in Dorset 2017”
I’m doing this to make couples planning their weddings aware that “award-winning” is not a selling point.

I’d love to tell you that there was an exclusive selection process, interviews, bride testimonials and some sort of filtering to win this but it simply isn’t the truth.
Lux sent me not 1, not 2 but 5 e-mails telling me I’d received a nomination. the first 4 I ignored having already formed an opinion on these awards but the 5th simply told me to “enter” I’d simply have to respond with the word “ACCEPT”.
So there it is, I won an award for successfully clicking reply, typing the word “ACCEPT” and then clicking send – worthy of praise indeed!

I’d like to apologise to anyone who saw my Facebook post as I did post it without a hint of irony but it was actually to make a point – at the time of writing the post I made has been “liked” by over 50 people, none of these people have asked anything about how the award decision was made, what the criteria was or what I had to do.
Several have commented that it is well deserved which I do thoroughly appreciate!

What wasn’t shown on this post was the second part of the email which is why I was really given this award, to make money for the company running the awards .The words below are pretty self-explanatory. 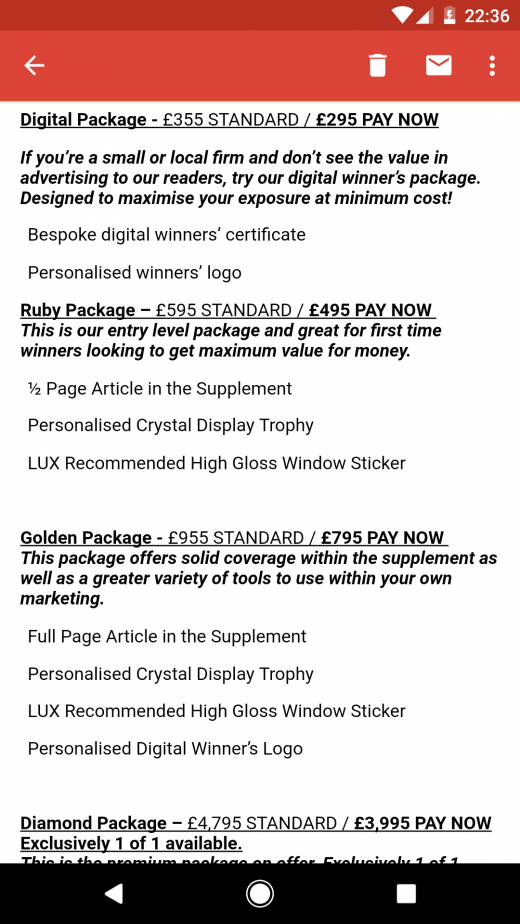 But what’s your point Chris? Don’t you want people to book you?

Well, yes of course I want people to book me but I also want them to be booking me and other wedding suppliers on their actual merits and for the right reasons.

If you’re looking to book a magician, for example, then you will probably see award-winning on nearly every magician’s website there is but what have they won – have they won a BAFTA or have they won a competition at their local magic club, have the won a Wedding Entertainment award with a proper selection process or have they simply had to respond to an email with a single word.
Booking a magician should be about seeing videos of them perform in real situations such as weddings, they should have countless professional performance photos, they should have unbiased 5-star reviews coming out of their ears, they should be recommended by other suppliers as well as venues – something that perfectly describes me and that’s why you should book me not because I won an award by responding to an email.

The same goes for other wedding suppliers too!

If you'd like a monthly email with wedding tips, the latest blogs, supplier recommendations and interviews then enter your name and email address below.